The church of St Botolph in Grimston is at TF 723 218. It is part of a ten church benefice, with this website, and there is a good church history here. There is also a village site, with a church page here. Apparently St Botolph visited the village in the C8. I know that Colchester Town station was called “St Botolph” when I was a lad – Botolph and his brother Adolph were young Saxon nobles living in the C7. They were educated at a Benedictine Abbey in France, Adolph rose to be a Dutch bishop, whilst Botolph came back to his native East Anglia. King Anna gave him land to build a monastery, probably at Iken, near Aldeburgh in Suffolk. He died in 680.  I did a 7 mile circular walk from our cottage in Gayton – the worst bit was the bends coming up to the church.

It may be that the original church was Saxon, probably on the site of a Roman temple. There are some Roman bricks in the outside wall. The small church was rebuilt and enlarged in the C13 – the South Aisle is in the Early English style, dating between 1220 and 1240. There is a painted consecration cross inside the church. The chancel, transept and porch are C15. In the porch was a poster with Michael Green, their link missionary – his grandmother was my organist at Felsham in Suffolk, when I was first a Vicar. A real blast from the past!

The church records date back to 1552, and one history notes that “Under Cromwell’s disestablishment of the Church, weddings took place [in the porch] from 1653-1660, conducted by Justices of the Peace. Our register shows that John Harvie and Thomasine Ives were the first couple to be married under the new system on St Valentine’s Day 1653. But the reforms emanated from faraway London, and there was a bit of a muddle to begin with, so the couple had to come back and be married again a month later. It appears the Banns were not called properly the first time.”

The church is high, and I should probably have looked more closely at the architecture than I did. I did enjoy the colours of the ceiling. 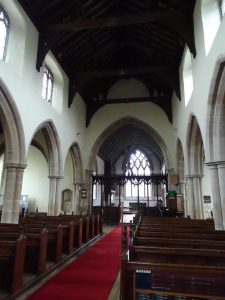 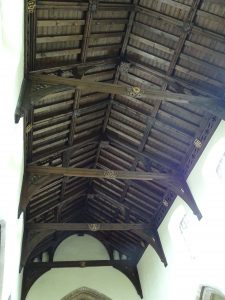 The colours of the C15 rood screen are still vibrant.

I enjoyed the bench ends and the misericords – C15 again. They are rather lovely. There are lots of excellent photos here. 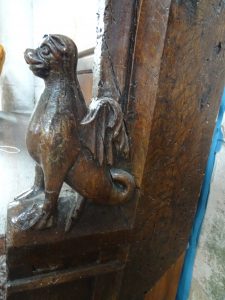 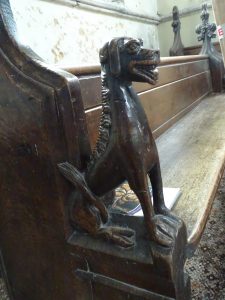 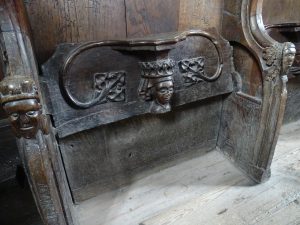 I enjoyed the tracery of the East window – from inside and out. One figure, and one grave. Worth visiting. 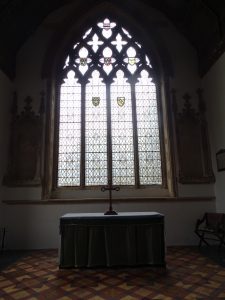 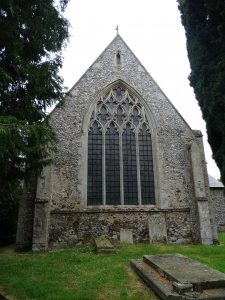 In the old school next door is an Art Centre and café – website. There was a gorgeous exhibition of work by Elizabeth Fitzgerald Carter – website – and I got a good welcome (despite the fact it was almost 4 pm and closing time when I turned up). It was a good afternoon walk – and we had a pub supper to celebrate.

This entry was posted in 1,000 mile walking, Norfolk. Bookmark the permalink.