Thursday 3 August was my 55th birthday. We drove to Lichfield, which is a town we enjoy, with a nice coffee shop by the car park. We did some shopping. We had a good explore of the Cathedral – I’ll blog that separately (it’ll be a while, it’s a big job) – and lunched in their café. We drove home via the back road, the A515, and called at King’s Bromley and Yoxall.

All Saints church, King’s Bromley SK 123170 is in the Diocese of Lichfield. I can’t find a website and I don’t have a Staffordshire Pevsner (must add it to the Christmas list), but there is a small leaflet.

The porch is apparently Victorian, and I don’t like the doors, but the south wall is fascinating. There is an early window (Saxon or Norman). I missed the scratch dial and arrow sharpening hole. 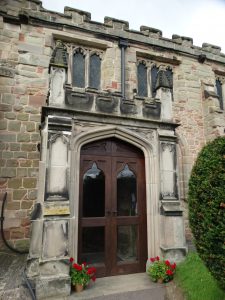 An interesting yew arch, wooden grave marker, and the Victorians renovated the cross for Her Majesty’s Diamond Jubilee. 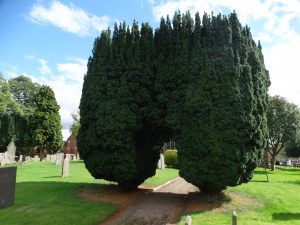 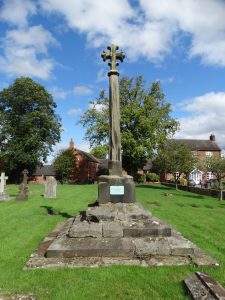 The nave is the original Saxon/Norman church, the clerestory was added about 1450, and the roof renewed in 1927. 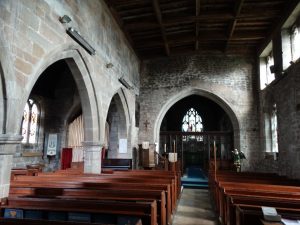 The font is dated 1664, and was a replacement after the restoration of Charles II. The initials WU and SH were churchwardens at the time. 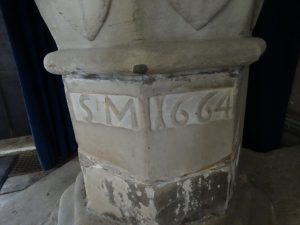 The pulpit dated 1656 is the top part of a two tier pulpit which stood in the right hand corner by the rood screen, and was moved here in 1927. The choir wood seems to be early C20, with some nice angels. The organ was originally in the north aisle, then moved to its present position in 1927. The sealed vault of the Lane family is underneath. 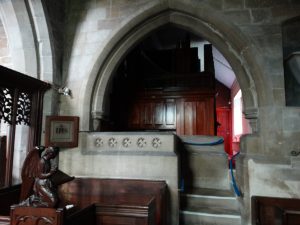 The high altar is the original stone slab removed at the Reformation and rediscovered during the 1870 restoration. The reredos is of marble and Staffordshire alabaster, by Jones and Willis, 1911. The east window, based on the Light of the World, also dates to 1911. On the south wall of the Chancel is an original WW1 wooden cross – and there is a website about them – here. It marked the grave of Captain George Roland Lane MC, born 27 February 1894. He was previously wounded in 1914 and killed in action in France on 15 September 1916 during an attack on Lesboeufs.  He is buried in Guards’ Cemetery, Lesboeufs. On the north side is a rare, wooden, missal shelf – C13 or C14. 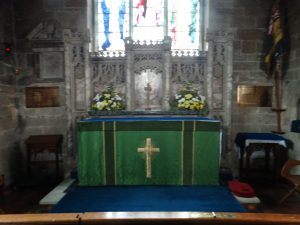 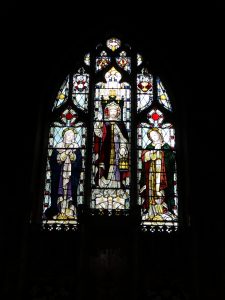 I think this is the Eginton window, fragments of mixed glass by Francis Eginton – here is his Wikipedia entry, though it does not mention this church.

There was also a nice photo of the W.I., and good displays as I left church. 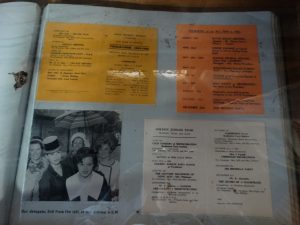 Finally, the clock is by John Smith of Derby. It originally had one dial, now it has three. In the estimate of 1898 they offered to “form a first class clock which would keep accurate time and which we guarantee to maintain perfect accurate time with less variations than 15 seconds per month.” The guide comments that “This guarantee still stands.” 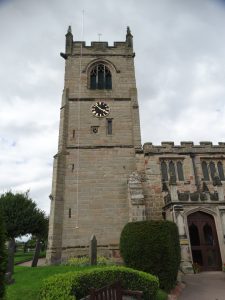 This entry was posted in Staffordshire, World War 1. Bookmark the permalink.