Here is the Vicar’s letter for the August magazines …

Thank you everyone who came and supported the talks Julie and I gave on the Reformation. It was lovely seeing people from both churches, plus from the other churches in Allestree, plus other friends. We enjoyed putting the talks together, and now want an American lecture tour.

If you want to read what we wrote, have a look at St Matthew’s website.

The study of our past must never be an academic exercise. Listening to the choir sing a Tallis motet takes us back to a composer who had to walk a careful line between religious and political survival. Singing a Psalm set to a hymn tune (“The King of love my shepherd is”) reminds us that the Reformers wanted people to take God’s word into their (our) very selves. Walking round a monastery taken apart brick by brick at the Dissolution, reminds us that our faith must be a faith in Jesus Christ, not just a faith in buildings.

We met some friends at Baddesley Clinton – a National Trust property between Birmingham and Warwick. A gorgeous, moated property, with garden, dahlia bed, café, and a second hand bookshop (that was expensive). 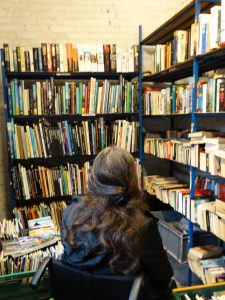 In the first room was a timeline – with mention of Nicholas Brome, an owner in the fifteenth century, who “slew ye minister of Baddesley Church finding him in his plor [parlour] chockinge his wife under ye chinne [flirting with her].” Not a good example of the priesthood.

The house then went into the Ferrers family, and they were a family that kept their Catholic faith at the Reformation. Under the Act of Uniformity of 1587 it was a treasonable offence to be or to harbour in your house a Roman Catholic priest. Baddesley Clinton was used as a base for missionary work by the English Jesuits. If they had been caught, the punishment would have been death. A priest hole was built under the floor. The only way to access it was via the shaft of the garderobe, or privy. 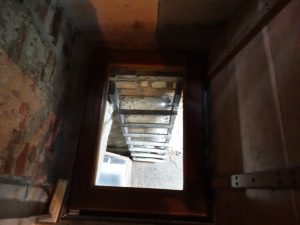 In October 1581 Father John Gerard wrote this account: “It was about five o’clock the following morning. I was making my meditation, Father Southwell was beginning Mass and the rest were at prayer, when suddenly I head a great uproar outside the main door. Then I heard a voice shouting and swearing at a servant who was refusing them entrance … . But a faithful servant held them back, otherwise we would all have been caught. Father Southwell heard the din. He … stripped off his vestments and stripped the altar bare. … [We had] enough time to stow ourselves in a very cleverly built sort of cave. At least the leopards were let in. They tore madly through the whole house, searched everywhere, pried with candles into the darkest corners. They took four hours over the work but fortunately chanced on nothing.”

Next time I don’t want to get up for an 8 o’clock communion, next time you think “I can’t be bothered to fit church in today”, we would all do well to remember their example and their faith.

This is the reason we have days out, to give our magazine and blog readers something to read.

I am not going to blog the history of the house – it goes back to the Norman Conquest. Just enjoy it! If you want more, here is the National Trust website. The Hall’s grid reference is SP 200715.

The Chapel as it is now only dates to 1940. It was re-created by Thomas Ferrers-Walker, having been out of use for 17 years. Before then it was re-consecrated in 1875. Lady Chatterton had been received into the Catholic faith by Carinal Newman. The family debated building a new chapel, but Edward Dering wrote “It would have been an act of Faith written in stone; but the restoration of the old chapel leaves a deeper mark. It is founded in the history of the past, hallowed by the former presence of martyrs and confessors, and it bridges the continuity of the Holy Sacrifice in an ancient Catholic house that never had an apostate owner.” It is in the oldest part of the house, and has an access via the garderobe to the priest hole. 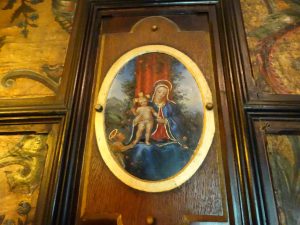 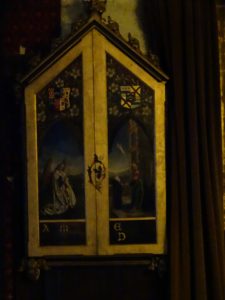 The room next door is more atmospheric – a simple vestry. You can imagine Father Southwell celebrating Mass here.

Just outside the vestry is this lovely painting on glass. It is a Dutch church interior, painted by Thomas Jervais in the 1700s. Later it was broken into many different pieces, and was restored (beautifully) about ten years ago. 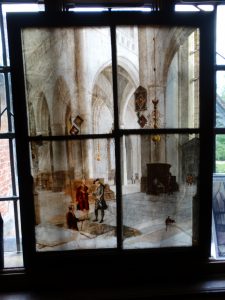 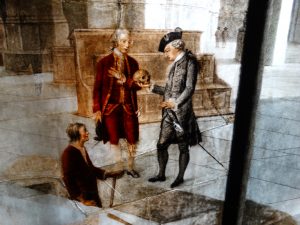 The gardens are beautiful, the scarecrows are fun. The dahlia bed will be stunning later in the year – no doubt we’ll see it when we come back for the book sale in August.

This entry was posted in National Trust, Warwickshire. Bookmark the permalink.