St Benedict’s church is the Mothers’ Union church in the centre of Lincoln – SK974711. It is run by the Lincoln Mothers’ Union, and they have a website, but it doesn’t tell me when the church is open. On Wednesday 10 August we had had lunch in the nice Italian – Bar Unico – across the road, then Julie went shopping and I explored with my camera. They had a welcoming poster outside, and rather lovely flowers inside. 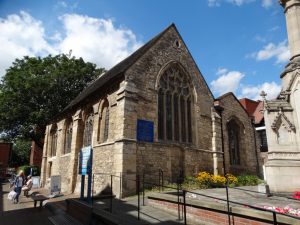 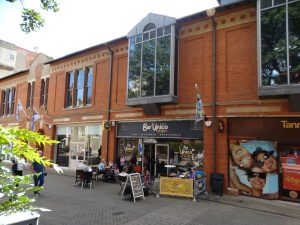 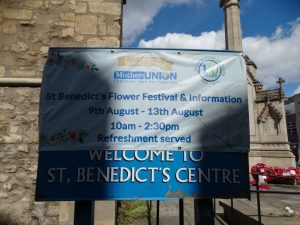 The church is just a bit of a church. There was a probably a Saxon church on the site, but the first written record is in 1170. Robert Dalderby, one time Mayor of Lincoln, probably founded a chantry at the altar of St Mary’s in this church. Apparently, in return for a lump sum of 300 pounds of silver, two chaplains would be paid a yearly rent of ten pounds of silver for their ministry. In 1378 Roger de Tateshall (Tatershall) built and endowed a chapelry. The church was the headquarters of the Guild of Our Lady and the Fishers’ Guild.

In the C16 the parishes of Lincoln were reorganized. The number was apparently reduced from 49 to 9. The guidebook says this was a number “which still far exceeded the needs of the population. Most of the churches were small and mean and in disrepair, and, indeed, several had fallen victims of the Civil War. St Botolph had collapsed, and the tower and nave of St Benedict were so much damaged that they were taken down, the tower rebuilt across the Chancel arch.” So what we have left is a C13 chancel, an early C14 chapel, and the replacement of a collapsed Saxon tower. 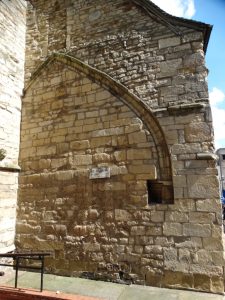 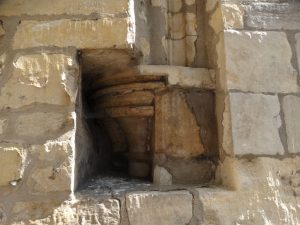 There are some interesting faces on the south side immediately under the eaves, and you can see by the door where different bits of the building once existed.

In the C18 there was only a monthly service in the church, this became monthly, and the church closed in 1854. By 1928 the fabric was in a dangerous condition. It was restored and reopened by 1932. In 1969 it became the MU centre. I got a nice welcome, some lovely flowers and MU displays – all linked. The lock is rather special , made of oak it is 400 years old. 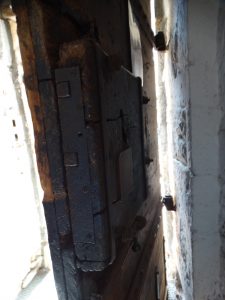 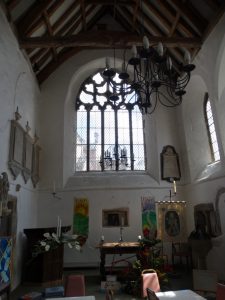 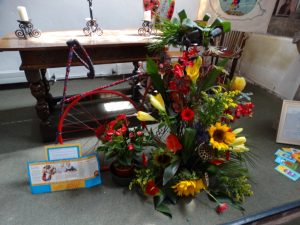 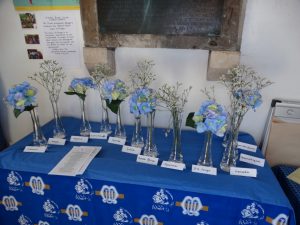 A nice altar with gorgeous Perpendicular Gothic window.  Was the niche for books and vessels? 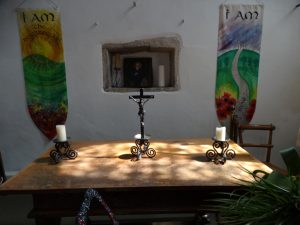 The font is C18. The statuette dates to the C15, probably from Antwerp, given to the church in 1932. Mary with a jar of ointment. 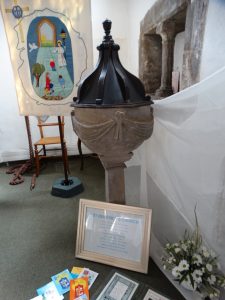 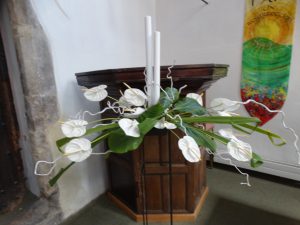 A Coat of Arms (George I), good memorial and some nice glass.

This brass, difficult to photo because of the reflection, was at St Peter’s at Arches until the church was demolished in 1932. It represents John Becke, who founded a noble citizen family. He was a draper and Alderman of the City, and ultimately Mayor of Lincoln. He, his wife Maria, and ten children, are depicted kneeling. Father and seven sons, wife and three daughters. Two of the children, Augustine and Marie, are holding skulls, indicating that they died before their parents. The guidebook does not give the date, but her costume dates to the time of the Puritans. 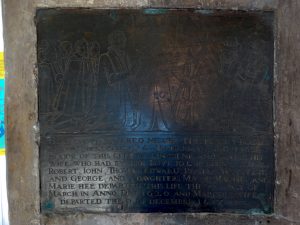 The City’s War Memorial stands in a small garden outside the church. The details are at this website – it was installed in 1922. I noticed the stone to one to Bill Fowler, who died on HMS Barham when she was sunk in 1941. He was one of 841 men who died in the Mediterranean that day. 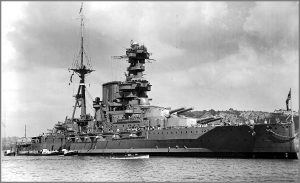 The HMS Barham association have a site here. They have an Annual Memorial at Evensong in Westminster Abbey every November – Gareth and I went in 2011, when they commemorated the 70th anniversary. It was the last occasion when survivors processed the standard down the Nave to the Tomb of the Unknown Warrior. Bearing in mind that those men were in their late 80s, early 90s, it was extremely moving – you could have heard a pin drop.

In this centenary year of the Battle of Jutland we ought to record that she also played a part in that conflict – details here. We visited the Naval Graveyard on the Island of Hoy in Orkney a few years ago where the survivors are buried. I want an Orkney holiday next year – you can wait for the blog.

I also spotted an Arthur Barham, Sergeant 53638, Royal Garrison Artillery. He died in WW1. I wondered if he was any relation to us. 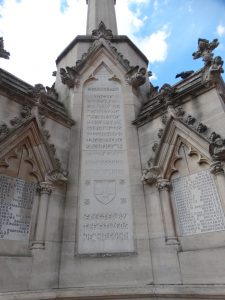 We went up the hill, and walked along to the Castle to visit “Wave” from the installation ‘Blood Swept Lands and Seas of Red’. Poppies and original concept by artist Paul Cummins, installation designed by Tom Piper. It was made by Paul Cummins Ceramics Limited in conjunction with Historic Royal Palaces. They were originally at HM Tower of London in 2014. It was actually a bit disappointing, partly because the sun was in the wrong direction to get a decent photo – but it feels a bit mean to moan when it marks the sacrifice of so many. 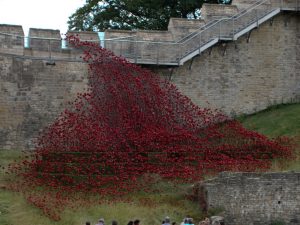 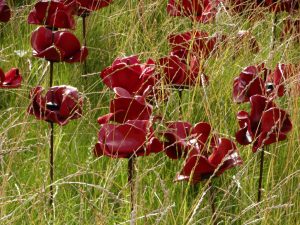 Later Cathedral Evensong was sung by an American choir – not bad at all – and we had soup at a nice café. Back to the Cathedral for the Mystery Plays – wonderful. Rain started falling at the interval, and by the end of the play we were both thinking “come on, resurrect”. It was very special, and (despite the weather) we were glad we went. 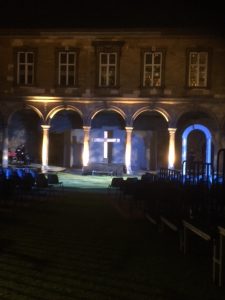 This entry was posted in Cathedral, Lincolnshire, World War 1. Bookmark the permalink.