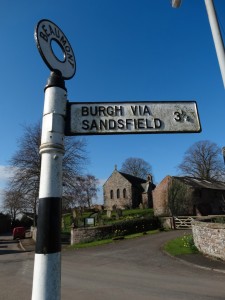 Beaumont (apparently pronounced Bee-mont) is a village on the Hadrian’s Wall Trail.  It is the third of the three East Solway churches – website – and Elaine and I called in on Thursday 31 March while walking Burgh to Carlisle. We walked up to St Mary’s church NY347593, “up” being the operative word – it stands on the site of a Roman turret (70A). Later we saw a poster for their Easter Egg Rolling Competition – I love the idea that the Centurion said “Right lads, keep building, they’ll need this mound nice and tall for Easter Egg rolling”.

The Normans built a motte and bailey on the site – the motte is the mound on which the keep would stand, the bailey is the area in front (the courtyard) – here that is now the village green. It was the Le Brun family, Lords of Beaumont, who we have to thank for that – and for their defence against the Scots. You can imagine where they got the stone from. 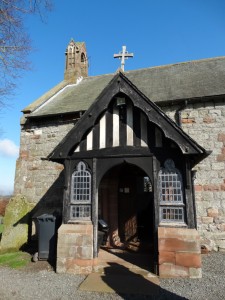 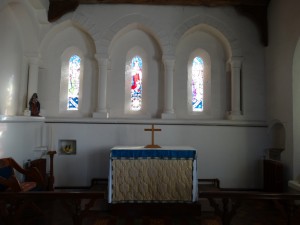 The church is C12, the doorway is Norman, and the first Rector was Sir Elias de Thirwall in 1296. The roof is C16, presumably installed after Bishop Nicholson’s visit in 1703. He reported that “The church is in as good repair as should be expected, but has not a letter on the walls, floor or churchyard. The East window in the Quire wants glass. … The Rector has neither house nor gleab.” There were renovations in 1872 and 1888 – I liked the fact that one of the kneelers remembers that. A smaller cushion with the toys has a verse from Crimond. 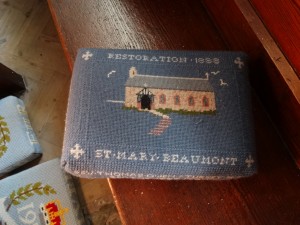 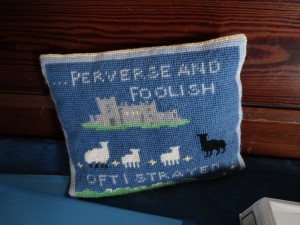 There are two medieval grave slabs, which were set into the west wall in 1872. One has a harp, the other symbols for a deacon. Being in Roman mood I assumed the counter-weight  for the font cover is an Eagle – Elaine pointed out that a dove of peace is more likely. 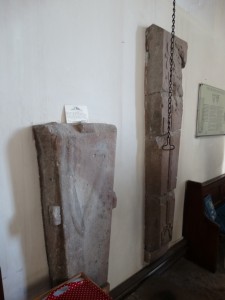 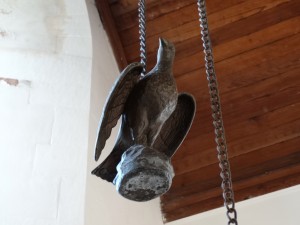 There are two War Memorials – the WW2 one was probably made at the Keswick School of Arts and Crafts. 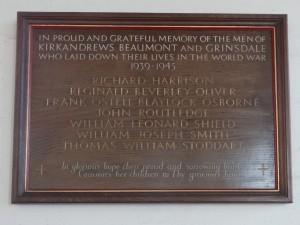 A nice set of musical angels in the east window, and a small organ. In 1970 they installed an electrified blower, but have kept the handle in case the power fails. 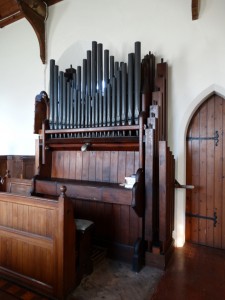 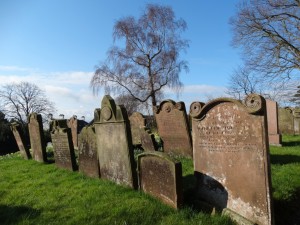 Outside I enjoyed the gravestones and the daffodils. Thank you Roman turret builders, and the good folk of Beaumont who care for their church, serve their community and welcome us walkers. 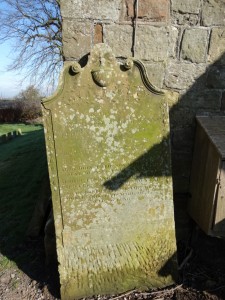