Sunday 13 September, the final HOD church. After a 2 pm baptism Julie and I drove to Mitford NZ169856 to have a look at St Mary Magdalene – it is a lively village church that has a large following and a wide range of worship.  They have a website which has a paragraph about church history. I have visited on several occasions, but have not found the church open – it was today.

The castle is opposite the church, and one day I must walk up there. It is likely that there was an earthwork fortification was begun around 1070, in 1138 it was described as the “oppidum” (administrative centre) of William Bertram, and in 1215, when much of the surviving stonework must have existed, having been seized by the Flemish troops of King John the barony was taken from Roger Bartram and given to Hugh de Balliol. A garrison commanded by Philip de Ulecotes withstood a siege here by Alexander II of Scotland the following year, and in 1315 it was the headquarters of a group of bandits. Said bandits were executed in 1318, and the Castle was dismantled. It was described as wholly burned in 1327 and it is uncertain if it was ever restored. Excavations in 1938 uncovered the remains of a mid C12 chapel and an earlier burial ground. 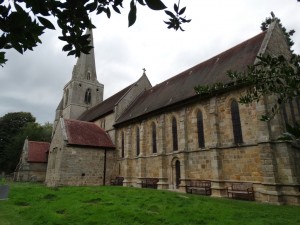 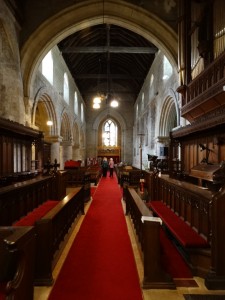 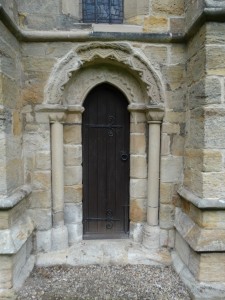 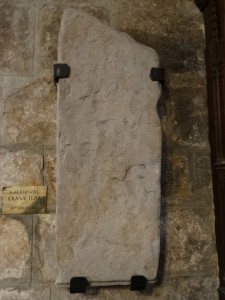 In 1216 St Mary’s was burned by King John, with many of the villagers who had taken sanctuary in the church still inside. In 1327 the church was damaged, probably by fire, when the castle was also destroyed. In 1705 the nave roof was yet again destroyed by fire from the open braziers heating the church. It was re-roofed and restored in about 1840, and then enlarged in 1870 by R.J. Johnson (whose work we have often seen elsewhere, e.g. Newcastle St Matthew’s) for the squire of Mitford. A new chancel arch was raised, the chancel repaired and new east window installed. A new reredos was fitted in 1883.  There’s a nice sedilia and the tomb of Bertram Reveley, who died in 1625. I also liked this wall plaque. 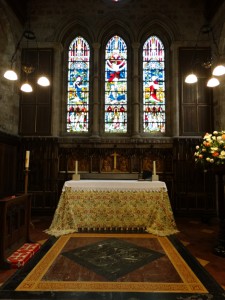 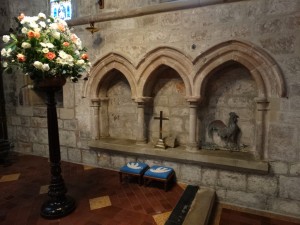 We should record that the 1870s renovation of this church was carried out by the wonderfully named, and wonderfully dressed, John Philip Osbaldeston Mitford. There’s a memorial tablet to an earlier member of the family, John Osbaldeston Mitford. This cross is to William Robert Mitford, late Secretary to the Post Office in Scotland, died 1899. I have some fascinating dvds which show the Royal Mail at work in Scotland – planes, boats, trains, and men who walked miles every day to deliver the mail across the mountains. I recommend the website of Panamint Cinema. However I cannot find any written history of the PO in Scotland – let’s retire now and go and write it. 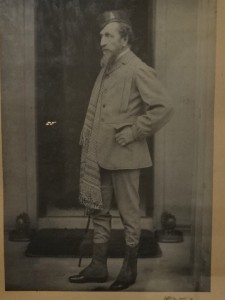 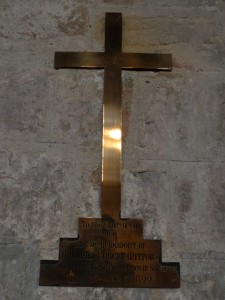 There are a couple of World War memorials. There is some information and a picture of Ian Macleod at this website. 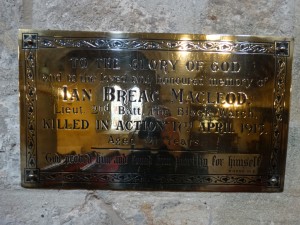 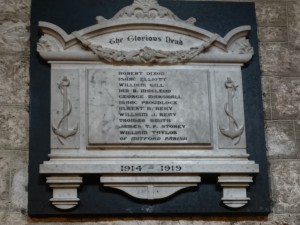 The ancient bell now hanging beside the main door is believed to be from the twelfth century and, according to the church website, is said to be the oldest bell in Britain. As you would expect, other church websites give different suggestions. A peal of 13 bells was hung in 1876, and is apparently operated from the baptistry by ropes. 13 bells sounds very complicated. 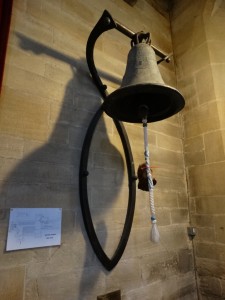 There is an interesting variety of glass in the church, and some of my photos are not very good. I love this Evetts window. It was made in 1954 in memory of Mary Rayne and Ada Elizabeth Wood, and shows scenes from the life of Mary Magdalene. 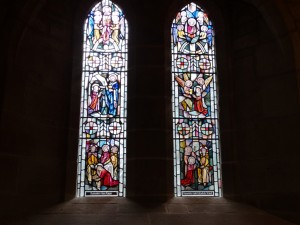 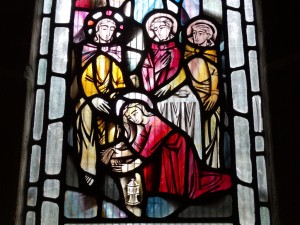 I like this window (left) with Christ in Majesty. This window (right) is in the Mitford Chapel and also commemorates St Mary Magdalene. It was made in 1896 by Kempe & Co.  This Clayton and Bell window (bottom) of 1876 has the Agnus Dei, Lamb of God, standing on a rainbow (which is, according to the information given, rather rare). 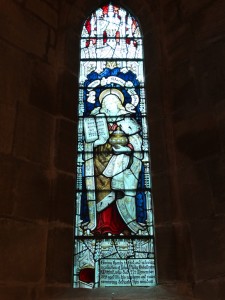 As I wandered round the churchyard there are some lovely headstones, and my eyes were drawn to the graves of two previous Vicars. Is there any reason why they have both chosen the same biblical verse? 2 Timothy 4.7 “I have fought the good fight”. I could ask Joanna, the current priest-in-charge, but she’s too tactful to tell me (and I wouldn’t blog it even if she did!). We had enjoyed our visit to Mitford – thanks Heritage Open Days for some splendid churches this year. 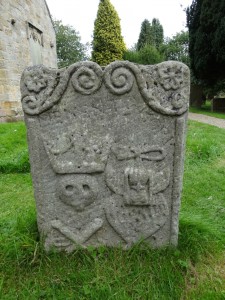 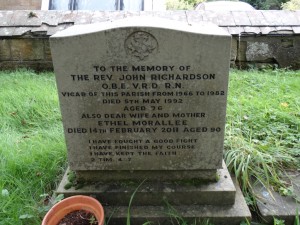