St Michael’s church, Burgh by Sands – website – NY329591. Here we are on top of the Roman fort of Aballava, probably the apple orchard. They will even sell you a postcard of the fort. In the C3 the garrison consisted of Moors from North Africa, and probably Frisians (northern Netherlands) and Germans. No one seems to know exactly what happened to the settlement at the end of Roman rule, but the stone certainly came in useful. I wonder if this is an old lump in the church wall. 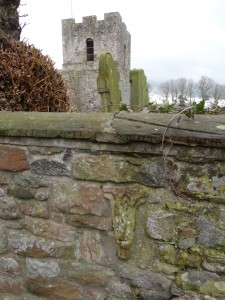 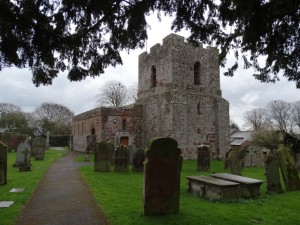 As you walk up the path there are a set of recent stones forming a time line. It is a nice idea – there is a wonderful one at Skara Brae, but I did wonder if they could have done something a little more artistic. I like the fact that the penultimate one is blank, so you can be here in the present. This timeline, and a huge amount of work on the building and its welcome, is part of the Three Solway Churches project – we will do Beaumont, the third church, when I continue my walk. They have included a Pilgrimage Trail, so we are doing more than history – well done them.  Excellent guidebook and leaflets too. 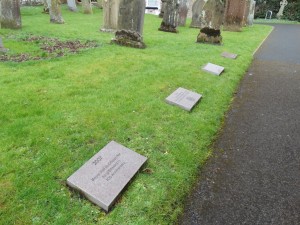 In about 1200 Sir Hugh de Morvill, Lord of Burgh, gave the church to the Cistercian abbey of Holm Cultram. It would have been the present nave and chancel. The Norman door is likely to have been the north door of this church, rebuilt in its present position when the north aisle was added in the C13. There is also a door at the west end of the north aisle which has been recently re-sorted to make disabled access. It is a lovely piece of wood and the stonework around has been done beautifully. 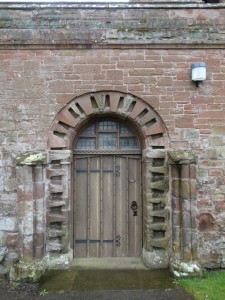 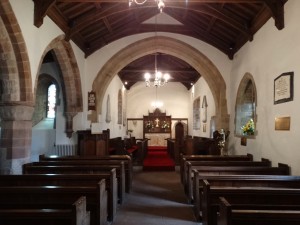 On 7 July 1306 Edward I died at Burgh, and his body rested in the church for a few days before the new King, Edward II, and his Court arrived and the body was taken to London. Imagine the fuss!

The next few years were very troubled as the Scots came across the Solway – between 1314 and 1339 the value of the manor was reduced to less than half. In the 1350s a fortified bell tower was added, with walls two feet thick. The guidebook refers to other fortified churches at Ancroft in Northumberland and Great Salkeld in Cumbria, both of which are already on this blog. They also added some holes (firearm for the use of, you can cover the door from here) and a wonderful metal gate. They must have built it in situ. Some nice lumps of stone too. Over the door is a stone carving with a bird, a larger animal and some foliage. They may have been part of a tympanum – the filling between a rounded arch and a flat lintel – above a Norman door. Under the tower they have excellent display boards telling the story. 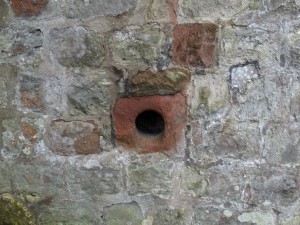 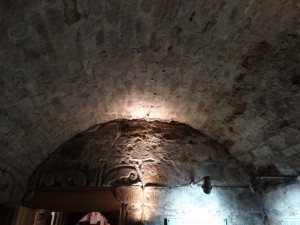 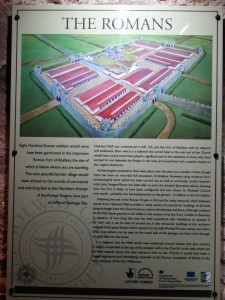 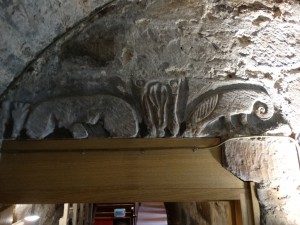 The church was restored in 1880-81, with new roofs, a new floor and a chancel arch, and new woodwork.

In Church let us start with the font – a simple post-medieval bowl, C19 base, and C21 Easter Eggs. How trusting to leave chocolate unguarded! 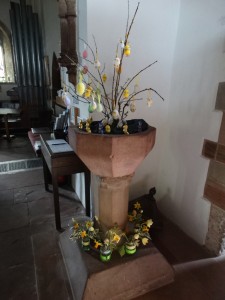 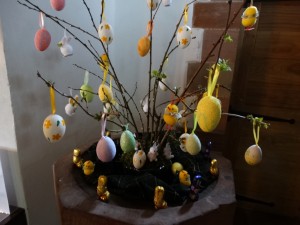 I liked the Millennium banner, with a nice picture of the canal to Port Carlisle. 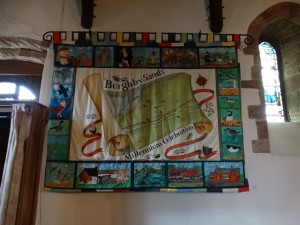 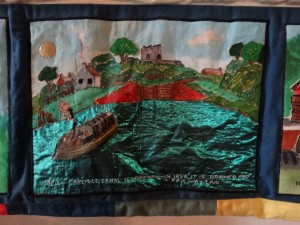 A couple of war memorial plaques. This website has a lot more details. The diary of Lt Kenneth MacArdle, a fellow-officer, tells us “Calvert – a student of classics lately from St Bees in Cumberland, with bored looking wrinkles on his forehead and an inability to pronounce his “R”s, which he substitutes with “W”s. He was meant for the Civil Service but makes a good enough soldier and is as comic as a clown with a tired resentful expression.” 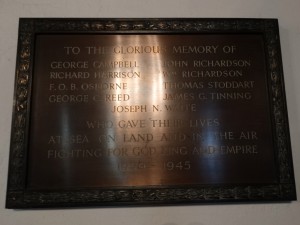 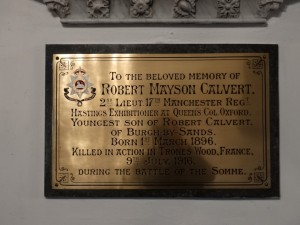 There was also an East Tower, which is why the Chancel has no east window, and a very narrow door into it. It may well have survived as the priest’s home, but was noted as “half-broken down” as early as 1703. The corbel is Norman, a man and his moustache. 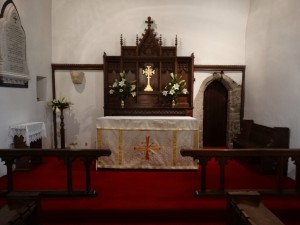 There are some nice windows, including five by Heaton, Butler and Bayne of London, dating to 1898. They show Cuthbert (with Durham Cathedral), Aidan (Lindisfarne), Kentigern (St Asaph’s Cathedral in Wales),  Edward I (Burgh) and Ninian (Chapel on the Isle of Whithorn). 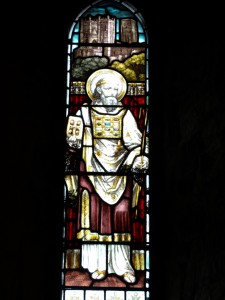 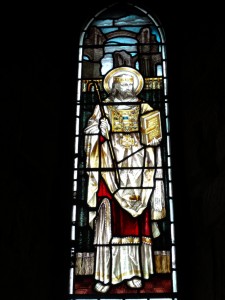 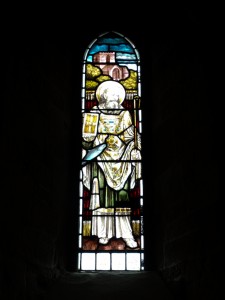 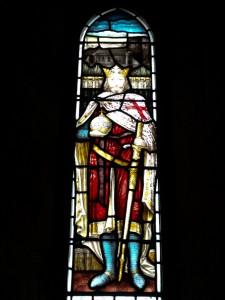 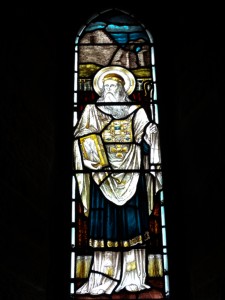 This is a lovely church, and two other visitors were arriving as we left. I had a wander round the churchyard – there are some wonderful graves. There is a 1784 monument to the Henderson family on the south side wall – lovely cherub. I smiled and continued my journey. 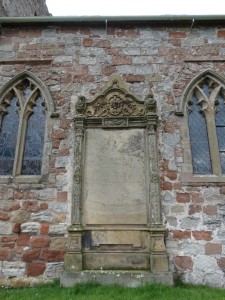