This is what I wrote for April’s Grapevine, our church magazine:

These boots are made for walking

When I came to Ponteland I started walking Hadrian’s Wall. I got as far as Housesteads … Now I am fitter I am going to have another go. I am going to start at Bowness-on-Solway and head west. I will use my blog to report on my progress. When I get a little closer to Ponteland perhaps I can invite people to walk with me, or to join me at Vallum Tea Room for an ice cream. When I reach Wallsend it will be an excuse for a party (or at least tea and cake). Harry says I cannot do a walk without raising some money for Changing Faces …

Alison the editor pointed out that if I head West I will need a bathing costume, and altered it before it went to print. (I will hand back my Cambridge Geography degree). On Monday 21 March 2016 I made a start.

There is a 685 bus from Hexham Police Station to Carlisle which leaves at 0728. I caught it! It is a lovely ride, through Haydon Bridge, the old A69, Haltwhistle and Brampton. A day return is £7.70. I enjoyed the ride, plugged in to my phone (I can’t read on a bus) – a wonderful BBC Radio 4 extra programme about Kenneth Williams and Round the Horne. Fond memories of going to Round the Horne Revisited with Gareth while he was in hospital in London.

I was surprised the number of school children travelling many miles to the school in Brampton, and I haven’t been into Carlisle this way since last December’s floods – there are a lot of empty homes. We were due into Carlisle about 0951 and were a couple of minutes early – I had time to find coffee and a loo.

Back to the bus station, which is a dump – sorry Carlisle, but it is – and the young lady driving for Stagecoach came to say she hadn’t got a bus. When it arrived she said she’d only been working for a fortnight, and thought she knew where she was going.

She sold me a return to Bowness which was £10 – seems odd it is so much more than the other service, but as I had my own chauffeur driven bus, I can’t really complain! As you can see from the map, the 93 is a circular route and the 0910 departure goes the long way to Bowness-on-Solway. It also reverses in Kirkbride and in Anthorn, and my chauffeur knew where she was going. It was a lovely ride with some narrow roads and a very narrow bridge – we did collect some other passengers en route.

I was deposited in the village of Bowness at about 1015 (it should have been 1009). Once I could have come by train – this is Bowness station in 1913 (I have lifted it from this website – I hope that is OK). It was on the Solway Junction Railway, which crossed the estuary on the 1,950 yard long Solway Viaduct – a direct route from the ore mines of Cumberland to the furnaces near Glasgow. The viaduct was also useful for those Scots who wanted to walk across to get a drink on the Sabbath.

I thought it would be nice to start at St Michael’s church – the start of my walk, the start of Holy Week, insert religious thought here. “Welcome to St Michael’s … a beautiful village church built from the very stones of a great empire. Discover a place which has been welcoming visitors for over 700 years” says the notice. I got to the porch and found there was a toddler service going on. How dare religion get in my way? Anyone would think it was Holy Week! I had a wander round the outside – some interesting tombs, including this one which is very precise about the place of death. I will come back and do the church properly.

I used the loo at the village hall and signed the visitors’ book. I could have stamped my passport here, but my passport hasn’t come and they don’t have a walking season until May (to discourage people walking when it is damp). I walked down to the shore to start my Wall Walk. The shelter wishes me a good walk.

I walk with two guides. Anthony Burton has written the Official National Trail Guide (Aurum Press, 2012). David J. Breeze has updated J. Collingwood Bruce’s Handbook to the Roman Wall (14th edition, Society of Antiquaries of Newcastle upon Tyne, 2006). Collingwood Bruce wrote the first edition in 1863. He is buried in Newcastle Cathedral so I said “hello” when I went and precented Evensong last Monday. They both start at the east and head west – I am going in the other direction! I also have English Heritage’s An Archaeological Map of Hadrian’s Wall, at 1:25,000 scale (published 2014). There are many websites – this one for the Wall, this one for the Trail.

Breeze (page 371) quotes Bishop Nicholson writing in his diary on 29 August 1707, “the conclusion of the picts wall very discernible at a Quarter of a mile west of Bowness”. Inscriptions name the fort Maia, and at one time there was a Spanish Cohort here. It measured 128 by 188 metres, covering 2.31 ha, and was the second largest fort on the Wall – it would probably have held a thousand men. The modern road runs through from west to east gate, and there was a civilian settlement to the south of it. There is a stone at Tullie House in Carlisle which records a trader’s vow made as he set out upon a venture “… grant that a profitable return may add surety to my vows, I will presently hallow my poem one by one with letters of gold”. Sadly it has no gold.

I sent Harry a text at 1023 as I started to walk and phoned Julie. I wanted someone to record my first steps! A nice walk beside the Solway, mainly along the road. Port Carlisle was the terminus of an 11 mile canal from Carlisle which opened in 1823. 31 years later it was converted into a railway – must be one of the first to have done this. Passenger services commenced in 1854 and there was a horse worked service was provided between Drumburgh (on the Silloth branch) and Port Carlisle from 1856 to 1914. Then steam power was used until the branch closed in 1932.

There’s a few remains left – is anything Roman?

At this point it is worth reminding ourselves that there was no huge stone wall at this Western end. We won’t get stone until we cross the River Irthing. The first 31 miles (first if you are walking from the west, probably last to be built) are of turf. They probably worked east to west – so it is likely this bit was built AD 124. In 1896 Francis Haverfield was the first archaeologist to dig the turf wall. He found turfs had been laid as blocks with the grass surface intact, and the vegetation had decayed to form black lines within the body of the mound. Where necessary they would have cleared the alder and birch woodland, dug ditches, cleared turf, and built the wall – in some places it is obvious decent turf was in short supply. Turrets and milecastles were usually of stone, and there may have been wattlework parapets along the top as opposed to a huge timber construction.

The walking route runs south of the road past snowdrops and what I assume is the old canal, then past a caravan site (ice creams available) and along a track to Glasson. An old chapel has a couple of angels on each windowsill – a belief in God has been replaced by a belief in angels.

Then across some fields, and a track into Drumburgh. Drumburgh Castle is a fortified manor house, with wonderful heraldic birds and a Roman altar or two. It was originally fortified in 1307 by Robert de Brun, and this house was built for Thomas, Lord Dacre, under Henry VIII. John Leland, the Tudor historian (c1503 to 1552) wrote that at “Drumbuygh the lord Dakers father builded upon old ruines a prey pyle for defens on the contery … The stones of the Pict Wal were pulled down to build Drumuygh. For the Wal ys very nere yt” (Breeze, page 361).

The road now crosses the marshes and can flood at high tide. I sat and ate a hot cross bun while looking at the view.

I could almost be in the Cambridgeshire Fens, if it wasn’t for the mountains visible north and south. It is a little bit of a trudge, but the car drivers were considerate. Best of all were the sound of the skylarks – again, that takes me back to my walks through the fields of my youth. There may well have been curlews too – but I recognise skylarks, not too good on curlews! Lovely road sign – “Finglandrigg” sounds like something Sibelius should have written!

I walked through Dykesfield, then up the slope into Burgh by Sands. A rookery as I entered the village, and it is quite a long village. I came to this statue of King Edward I which was erected in 2007, the sculptor is Christopher Kelly. There is information about him at this website – thanks to village contacts who let me know. The text of a lecture given by John Watts of Corpus Christi, Oxford, entitled “Edward I: from Westminster to Burgh by Sands” is available at this website. He is the English king who took on Robert the Bruce – a short summary is here. There is a monument north of the village – something else to visit. 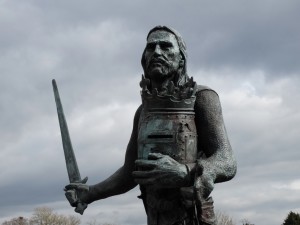 I arrived at St Michael’s church with less than 15 minutes before my bus. I might have had a quick dash round with my camera, but a lovely churchwarden caught me and gave me a brief introduction. There is so much to see I will not write it up now – but start my next walk with a proper visit.

I just had time for my second hot cross bun as the bus pulled up. I have managed 8½ miles today – if the Wall is 84 miles long, does that mean I have done 10%?

You know that my bus went the long way round the circle to get to Bowness, so it should be a short journey home … . No, the 1316 bus goes the other way, so I set off on the magical mystery tour. We said “hello” to Bowness and, an hour after leaving Burgh, passed a sign saying “Burgh 1½ miles”. Who cares? It was a lovely ride, and we got back to Carlisle a little early at 1430. I had a while before the 1507 to Hexham, so walked into the city to Bookends bookshop and Costa. The bus left late but has comfy seats – so I might have slept along some of the A69. A busy bus, lots of school children again, and I listened to the BBC. Making History had an interview with the Scottish historian Fiona Watson who has written a book on Edward I (more expense!), and The Organist Entertains  ended with Widor’s Toccata. It was lovely coming into Hexham with Widor in my ears – the trouble is that I play along and people wonder what I’m doing.

When we were at Cambridge our friend Andrew was organist at St Andrew’s Street Baptist Church, where the organ was just behind the pulpit at the front of the church. One Sunday morning Andrew decided to end the service with Widor’s Toccata. I was his page turner, so got up in the last hymn, walked to the organ, turned the pages – and was congratulated by lots of lovely people for my marvellous playing. A few months later he played Julie and I out to it at our wedding. In Ponteland Warren (our organist) plays a mean Toccata (the gentleman in the photo is Mr Widor, not Warren).

After 8½ miles walking I can still move the legs sufficiently well to play the pedal part – will I be able to do that tomorrow?