We crossed the A10 and entered Melbourn. In our day the A10 was Melbourn’s high street – the bypass has made it a much nicer village. All Saints’ church is at TL382448. I can’t find a website and the Melbourn village site has a virus warning. When we lived here (in 1984) we worshipped at the Baptist Church – website – Ron, who was our minister, went on to be an Anglican cleric (do you see a pattern here?). For many years in the 1970s my dad (Jeffrey Barham) taught at Melbourn Primary School – website. 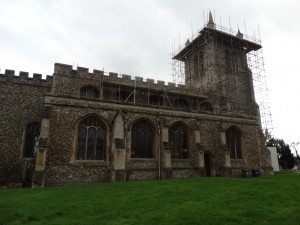 We parked by the Church Hall on the north side of the church – you can see some rather nice art work here. The church tower is covered in scaffolding – so I’ve found this old postcard.

The snowdrops and the aconites on the path are lovely, though Meldreth’s are better!

Apparently some C7 burials found in the parish are aligned east-west, which suggests a Christian faith, and a church is recorded here in a charter of King Edgar to the Prior of Ely dated AD 959. The first recorded priest is John of Foxton in 1229 (I wonder what they made of a man from the next village coming and being their priest), and the present building dates to the mid 1200s. Let us not just remember the clergy – but include those who were having great fun getting cobwebs down. 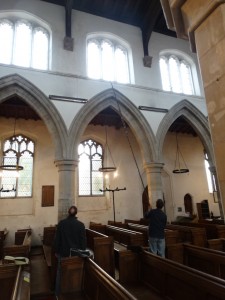 Some nice figures on the north door, lovely flintwork and another gorgeous figure on the south porch. The porch was rebuilt in 1884, and the room above, the Parvis, contains a stone fireplace and mantel. It was possibly the priest’s lodgings, and where the first school in Melbourn was held. A donation left by William Ayloffe in 1691 provided a free school for 40 boys. 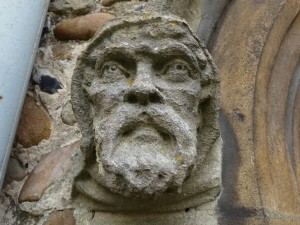 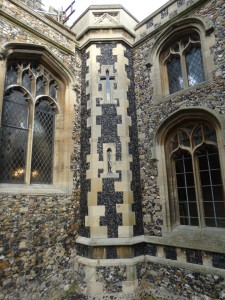 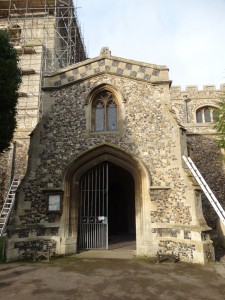 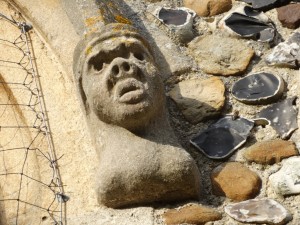 Inside it is a rather elegant, tall church, with some lovely gold bosses and stone carvings . There is also a Green Man, but he is not painted gold and I missed him. Fortunately my wonderful friend Rob took up my challenge and went to photo him. Thank you! 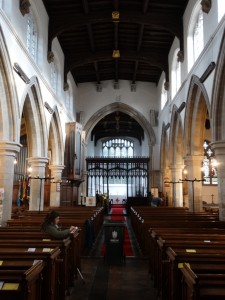 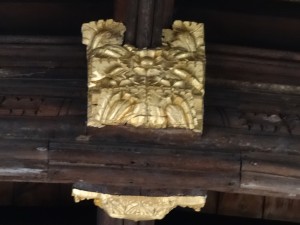 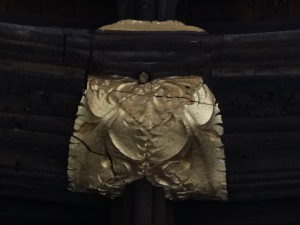 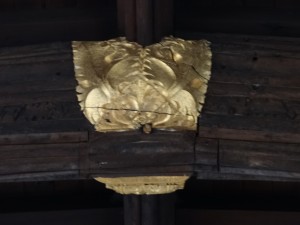 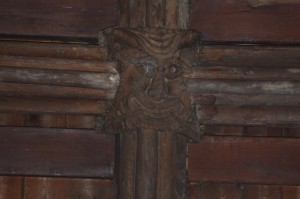 A lovely doorway, with carved figures.

There is a rather nice banner, though Belshazzar’s Feast is not the topic for a banner that immediately springs to mind. 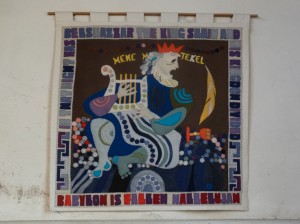 The Rood Screen is a fine oak screen with vined wreath carving. It was the gift in 1504 of Thomas Hitch, and cost £1 3s 6d. The rood itself was seized from the church in 1529 and destroyed at the Reformation. The walls of the chancel were raised during the rule of Bishop Alcock in 1487, and the east window dates to this time as well. The double piscine is late C13, the double aumbry is from a later period. The memorial tablet is to Lady Mary Hatton who lived at Trayles Manor, now called the Old Manor House in the High Street. She died in 1760 at the age of 76, having lived through the reigns of Charles II, James II, William & Mary, Georges I, II and possible III. 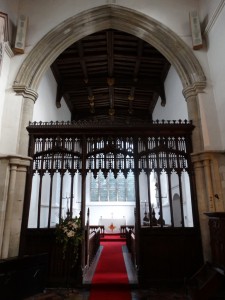 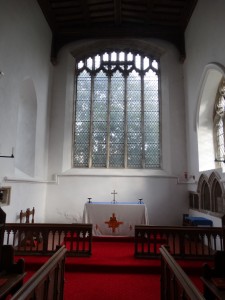 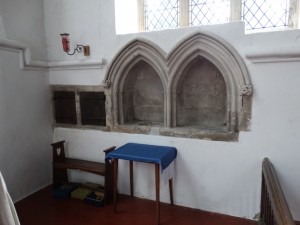 I didn’t get a photo of the complete Lady Chapel – just two of the windows. On the left is one in memory of Second Lieutenant Henry Brodie Day, who was killed in 1918 at the age of 21. I missed a later plaque to his brother. The other window is dedicated to Saints Michael, Martin and George, and was paid for by parishioners in memory of those who died in WW1. 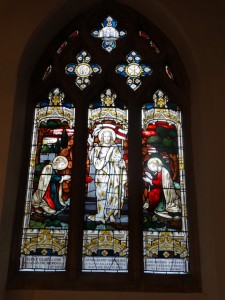 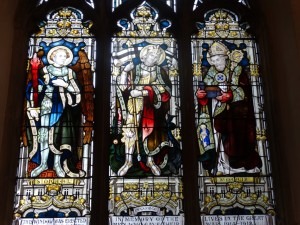 I should have said the church has an excellent guidebook with lots of lovely photos – better than mine! 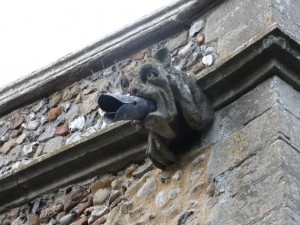 This entry was posted in Cambridgeshire, Personal, World War 1. Bookmark the permalink.

5 Responses to Melbourn, Cambridgeshire – All Saints’