On Saturday 12 September 2015, Heritage Open Day weekend, Julie and I went to Morpeth and visited St James. It stands on the north side of the town, grid reference NZ197863, slightly back from the road, and I had not realised quite what a large building it is. In 1842 the newly appointed Rector of Morpeth, the Honourable and Reverend Francis Richard Grey (the sixth son of Earl Grey of Howick) was faced with the problem of falling church numbers. The parish church was quite a walk and too small for the growing town, so he held a public meeting at the Town Hall and by the end of the evening a committee had been formed. Mrs Fenwick gave some land and the Rector’s father-in-law, the Earl of Carlisle, had a town house he was happy to see demolished (at least, that’s what the guidebook says …). Reverend Grey donated the first £100 himself, the Earl of Carlisle gave £400, and the Bishop of Durham £31.10s … hardly seems generous dear Bishop. The guidebook also says that when the Bishop of Durham instituted Francis Grey as Rector he “gave him two pieces of advice: always wear worsted stockings and never keep a cow”. (That’s where I’ve gone wrong!).

Rector Grey had spent his honeymoon in 1840 touring Italy and had been particularly impressed by the Cathedral at Monreale, near Palermo in Sicily, built by the Normans in 1172. “I want one” he said – you can have a look at this website  and see if you can spot the similarities. He appointed Benjamin Ferrey, who had worked with August Pugin, father of the Pugin, and was Diocesan Architect for Bath and Wells – he was also responsible for restoration of the West front of Wells Cathedral. He has a page at this website. Then they found a local builder, Thomas King, who had built the Telford Bridge in 1834. He had quarries at Park House and Hartford Bridge, and they agreed to get the stone from there. The accounts for 26 June 1844 include leave for Edward Barrow, the Clerk of Works, to buy “a table, two chairs, a fire shovel, a coal rake, a fender, a pair of tongs and a poker” – it was going to be a snug workmens’ hut. 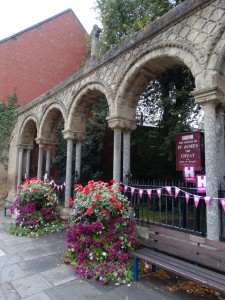 On St James day, 25 July 1844, a procession made its way from St Mary’s to the site of St James’. To quote the Morpeth Herald, “After morning service the procession was led by the Sexton, followed by the churchwardens, choir and clergy. Then came Mr Barrow carrying the plans, followed by Mr Secretary Wilson bearing parchment and coins to place under the stone, and finally, carrying a silver trowel to present to Lord Morpeth who was to lay the foundation stone, came Mr Thomas King the builder.”

Two years later, having cost just over £7,000 to build, the church was open for worship. It was consecrated on 15 October 1846 and “A considerable party sat down to a cold collation followed by toasts. The Rector and Mayor responded, the latter referring to the forthcoming opening of the Newcastle and Berwick Railway which would help Morpeth to put the right foot forward and go on and prosper.” The tower was not completed for another couple of years, and there were plans for a spire – but it seems that the building of the railway viaduct over the Wansbeck had used the decent stone. 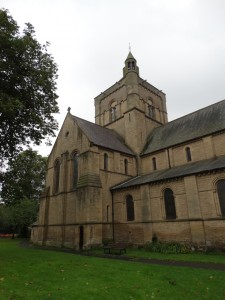 The Reverend Grey had been influenced by the Oxford Movement and its High Church ideas on worship. Morpeth parish was not the sort of parish that appreciated too much ritual – and there were numerous complaints to Bishop and to the Morpeth Herald. In 1869, in one of his sermons on the real presence (that Christ is present in Holy Communion), he was assailed by a cry of “treason, treason” and several men stood up and walked out. Yet when he died in 1890 practically every shop in the town closed and most houses drew their curtains as a mark of respect – he certainly served the people of Morpeth throughout his life. 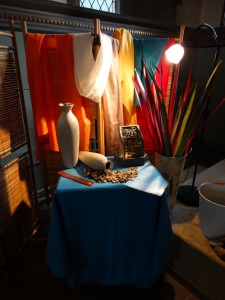 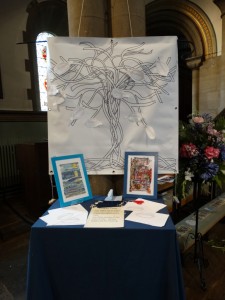 Back to this church. We entered to find a good welcome, some recorder players entertaining us, and various prayer stations around the church. Rachel, who happens to be school governor in Ponteland, had put together a wonderful selection of material for prayer – perhaps I can get her to do the same for me. 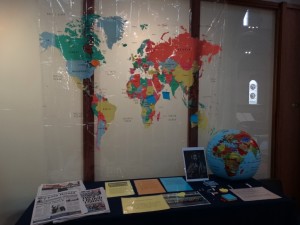 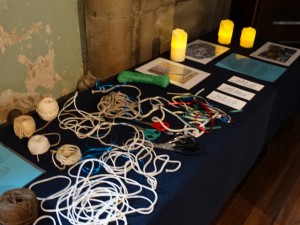 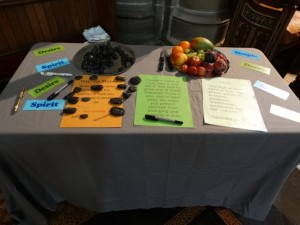 It is quite a church – apparently it was designed to seat 1,030 people. Is it any wonder that, with declining numbers, there was a plan to close it in the 1990s? I doubt they get 1,030 people even at Christmas, but it obviously has a ministry and a role to play in the community. It must also be a challenge to maintain, and they have my respect for the work they are doing. 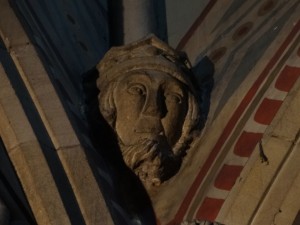 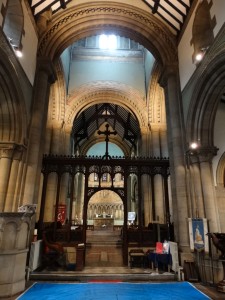 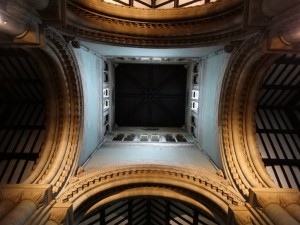 The Chancel screen was installed in the 1890s. It was designed by William Hicks of Newcastle, and was embellished and decoratively carved by  a group of local wood-carvers, who were taught at an evening class run at the King Edward VI Grammar School. The pulpit is original – it shows Mr Grey’s fondness for all things Italian. 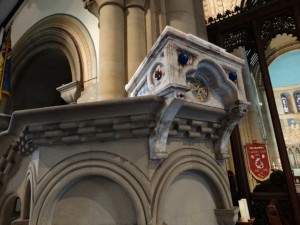 The font was given by one of the master-masons working on the church, a Mr Phaup. On the elevation photoed below we have St Matthew’s symbol, a winged man or angel, and John’s, an eagle. 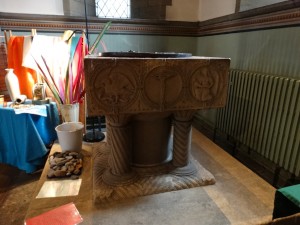 The organ, which seems to have been out of use for quite a while, is by Harrison and Harrison and was installed in 1870. There is a memorial tablet to John Brewis, who was organist for 51 years. Having played for 16 years he tendered his resignation as he was unhappy that he was only being paid £10 per annum. The Rector launched an appeal to his parishioners – and Mr Brewis played for another 35 years. His memorial tablet comments

We heard thee when the instrument,

Possessed and quickened by thy soul,

responded to thy full control,

With all the treasures of its dower,

Its sweetest and its grandest power. 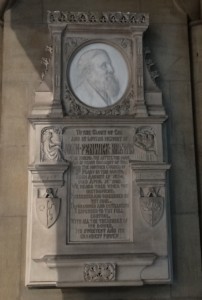 The War Memorial has many, many names.

The Apse has a set of murals which were painted in 1875. They were executed by Clayton and Bell – there are many C&B windows, but few murals. Apparently they were painted by two of their artists, Hewitt and Macdonald, who came up from London. They were painted in an oil-based medium, and are flaking badly. They should have been painted onto wet plaster – but weren’t. What should be done now? 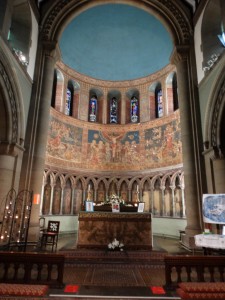 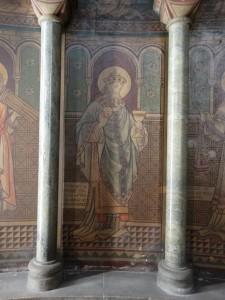 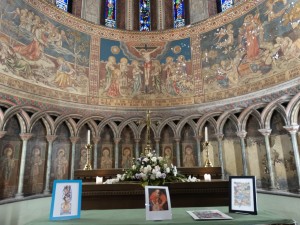 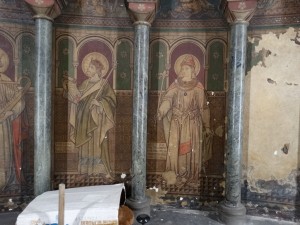 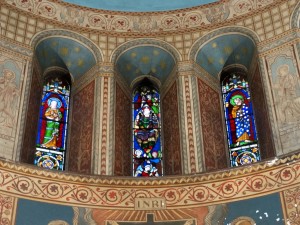 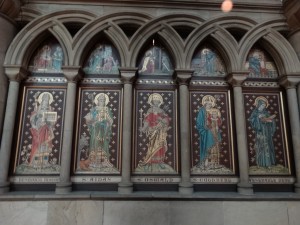 The windows are mainly by William Wailes, a Newcastle firm. They are bright and rather enjoyable. We have shapes and swirls, saints and bishops, and roudels of the story of Christ. I like the star over the wise men, but I do find the circumcision window a little too realistic. 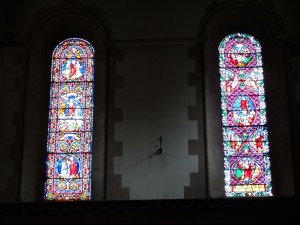 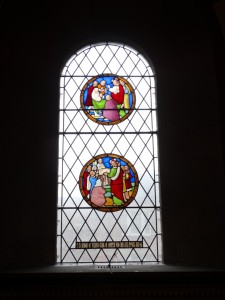 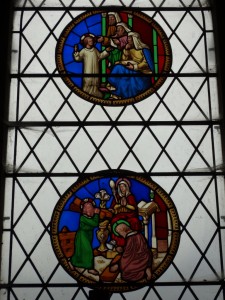 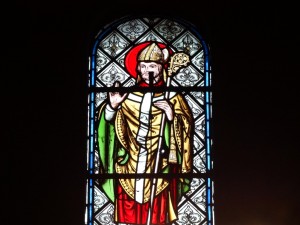 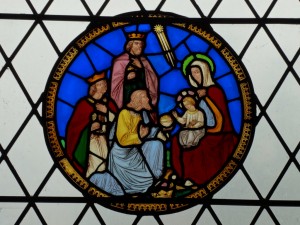 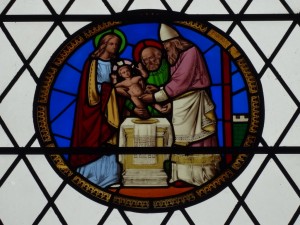 This last window is by Leonard Evetts and shows St James – rather nice. 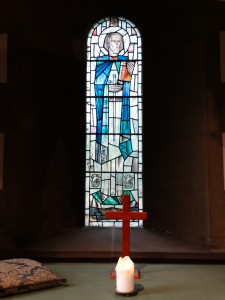 We had enjoyed this Morpeth church, and then got soaked as the heavens opened.