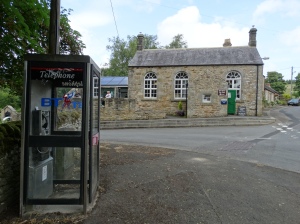 We don’t often drive right up to Kielder Water and this part of Northumberland, and it is a while since we have been to the Old School in the village which is now a café – website. I left Julie and went for a wander. St Peter’s church – NY724874 – is beautifully kept and the graveyard is immaculate. 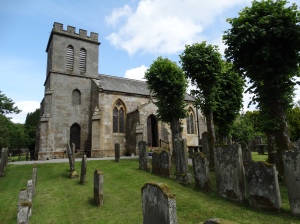 Bits of Saxon cross and other interesting inscriptions have been found nearby, but nothing is known of a pre-Reformation chapel. The church website  – says   “In 1650  parliamentary commissioners recommended that ‘the Chappell at Falleston be rebuilded and made the Parish Church thereof’, but this was not done. From 1709 onwards rebuilding was undertaken and the Chapel used by the Presbyterians. A new ‘English Chapel’ was built before 1725 within the graveyard of the present church, and probably just south of the existing church.  In 1824, on the advice of a Greenwich Hospital agent, an entirely new church was built at a cost of £1,040 together with a ‘handsome rectory-house,’ for a further £1,000 in which the first Rector took up residence. Archdeacon Singleton reported a few years later that the Rector ‘had seen some service at sea, became restless, expensive, drunken, embarrassed, and eventually insane in his retirement’. However his curate, Samuel Kennedy, a ‘respectable old non-graduate’ who had ‘neither the means nor the taste for domestic and horticultural nearness’ was on call to help with the ‘service once on Sundays and communion four times a year’. I like the idea of a “restless and expensive” Rector – to say nothing of a “respectable old non-graduate” who was no gardener. 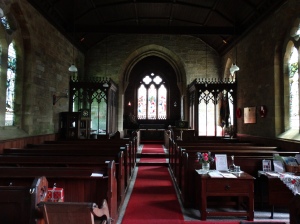 The church was re-seated and renovated in 1879 but “on the night of Sunday 26th November 1882 in consequence of overheating of the flue of the warming apparatus, the floor ignited. Fortunately the fire was discovered, not, however until it had scorched the ceiling, but by the prompt action of the villagers, it was extinguished before very material damage was done.” Would you believe there was another fire in 1890, and this one also damaged the church. It was rebuilt by 1892.  The 1824 church was by John and Benjamin Green, the restoration by Plummer and Burrell – Pevsner tells me it is Plummer and Burrell, but tells me no more. A google finds me plumbers in Lower Burrell, Pennsylvania! 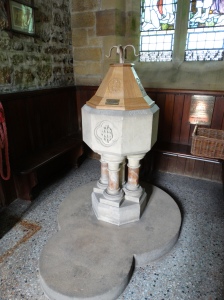 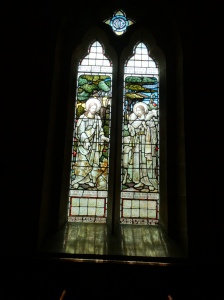 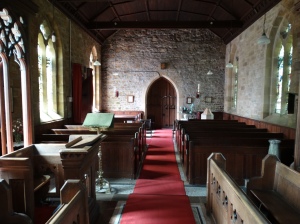 I like the way the organist has their own cage, and what on earth is this piece of stone by the pulpit? Answers on a postcard please! 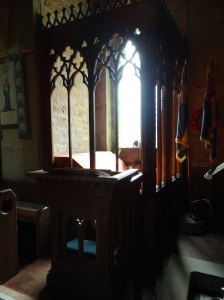 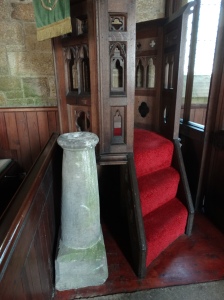 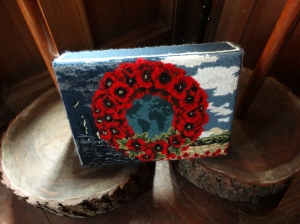 Last year they did some work and got a proper war memorial organised – before it had apparently been a paper list. Information about all of those who died is in the book “In Silent Fortitude” by Alan Grint, details here. It is also worth reminding ourselves of the NE War Memorials Project site – website.. There is a report about the dedication, and a full list of names, http://www.chroniclelive.co.uk/news/north-east-news/duchess-northumberland-attends-service-dedicate-7961343. 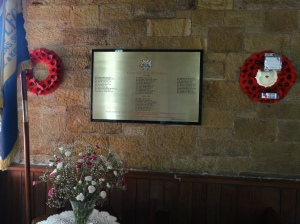 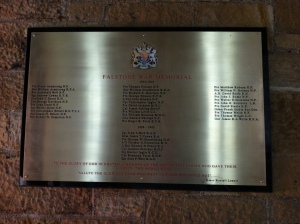 Well done Falstone-ites. Thank you for a lovely church. 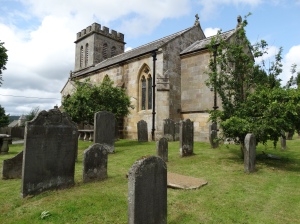