We continued up the A696, onto the A68 and stopped at Holy Trinity, Horsley – NY841972. The view across the valley, looking west, is lovely.

The church is on the east side of the main road and there is little parking, just some hardcore on the verge. Much better to stop on your way south rather than north. My wife is disabled – and Horsley is not a church for her. Look at all those steps! 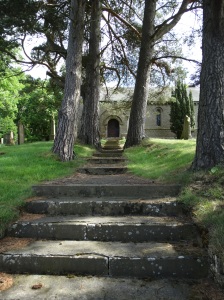 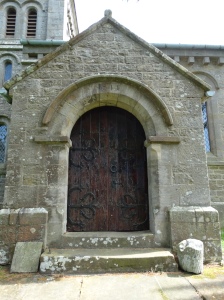 The church was built in 1844 by J. and B. Green, at the instruction of Lord Redesdale. Pevsner says it is Neo-Norman. There was no guide, no magazine, no notices, nothing to tell us when the services are. The team website has more information.

In the porch, and I love the way it takes up residence with a traffic cone, is a Roman altar. Apparently it comes from Featherwood, 3½ miles north of the fort at Rochester, and is dedicated to Victory and Peace. Some other lumps of stone too – interesting. What on earth are they? 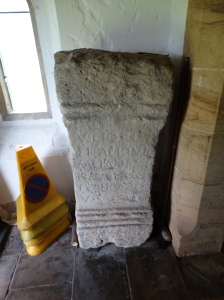 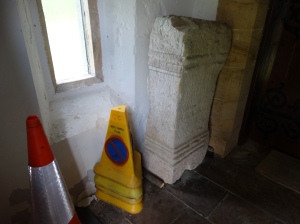 There is obviously some work being done on the organ – no mention of it on the website. [In February 2016 I found this website – an amazing project, let’s hope they look at access and publicity too]. Otherwise, quite a simple church. 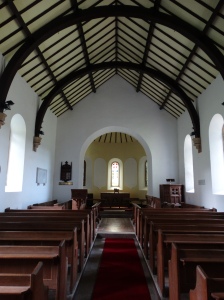 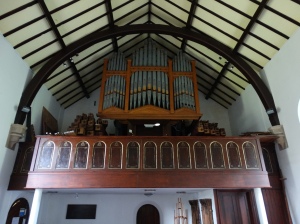 I like the design on the altar, and the font and font lid.

The Redesdale family date back to the C14, and David was the second son of 1st Baron Redesdale. Wikipedia says he was not bright enough to join his elder brother at Eton, so went to Radley with the intention he should join the army. He failed the entrance exam for Sandhurst and was sent to Ceylon to work for a tea planter. In 1900 he returned to England and joined the Northumberland Fusiliers as a Private for the Second Boer War. It does make me wonder how he got on in Ceylon, and what the other soldiers made of him. He served with distinction and was wounded three times, loosing one lung – how on earth did you cope with that in 1902? He married Sydney Bowles in 1904, and they had one son and six daughters. The daughters are the Mitford sisters, the last one of whom – Deborah, Duchess of Devonshire – died last September [2014] – bbc news.

David served in WW1 with the Northumberland Fusiliers as a Lieutenant and served as a Logistics Officer in Flanders. He was mentioned in dispatches at the Second Battle of Ypres. He was invalided out in 1916 – it makes me wonder how, with only one lung, he ever got in. By the 1920s he was a large landowner, but not a wealthy one. He lived at Swinbrook in the Cotswolds. By the 1930s he and his wife were known for their extreme right-wing views, and in 1938 they accompanied their daughters to Germany, attended the Nuremberg Rally and met Hitler. When War broke out, Redesdale was, above all, a patriot – but his wife stuck to her Nazi sympathies and the two became estranged. They separated in 1943. By the late 40s Lord Redesdale was living in Northumberland as a virtual recluse. He died in 1958 and is buried at Swinbrook. His wife is buried there too – here it looks as if the date of her death was added later. 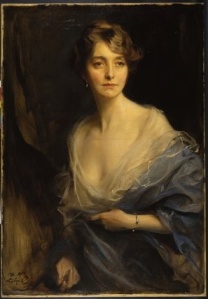 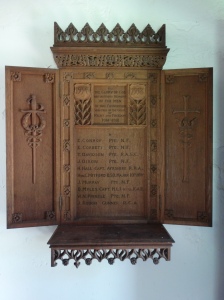 The Hon. C. Mitford on the WW1 memorial is David’s older brother Clement who was killed in 1915 at the Battle of Loos.

Here is a memorial to the Reverend Thomas Stephens – Vicar for 40 years. 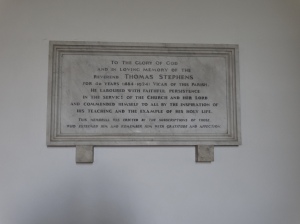 Outside are some interesting memorials, and I have never seen a plaque like this on a headstone before. 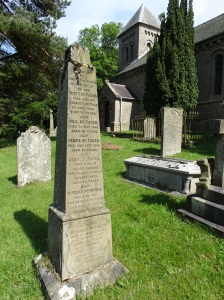