Barrington has a huge village green, and the church stands at the east end – TL397499. It is part of a largish benefice – http://www.beneficeorwell.co.uk/index.php?pageid=466. I have never seen a web page directed at those of us visiting; food, accommodation and public footpaths. Ten out of ten! http://www.beneficeorwell.co.uk/index.php?pageid=479

The guidebook is 30 years old, but very thorough. It tells me that the village has a Saxon name, Barra’s tun (or place) – I remember one of Dr Barham’s books telling me that too – and 114 Saxon graves were found here in 1879. Another graveyard was found in 1987 – see www.orwellshistory.org.uk/page_id__301.aspx. In the Domesday Book there were 49 peasant households comprising 220 people. In 1326 Hervey de Stanton, Chancellor to Edward II, conferred property and the advowson of the church to Michaelhouse in Cambridge. This was later amalgamated by Henry VIII with King’s Hall to form Trinity College – they are still the Patron of the Benefice. We enjoy the Brother Bartholomew books of Susanna Gregory, and her blog contains an excellent article about Michaelhouse http://www.susannagregory.com/bonus-material/michaelhouse-a-lost-cambridge-college/ 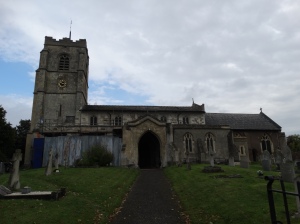 The first church would have been Saxon, the current building dates to the 12th century. The main part of the church is 13th century, built of locally quarried clunch ashlar and flint stones. The current restoration of the nave roof, parapets, window tracery, etc., is using some local clunch. Lovely 14th century porch, and marvellous 16th century parish chest. 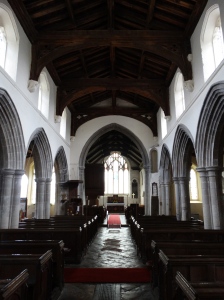 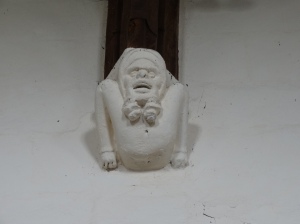 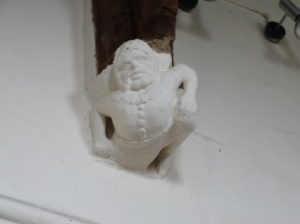 I liked the simple altar in the north chapel, and there is a wonderful selection of monuments.

The instructions to the bell ringers under the tower were written by Edward Conybeare, incumbent between 1871 and 1898. The guidebook describes him as “a typical Victorian gentleman”. “When unemployment was rife after the closure of the old cement works in 1893-4 he employed the men of the village in providing an adequate supply of drinking water and clearing the ditches on the green. A somewhat eccentric character, he was often to be seen riding about the village with his wife perched on the handlebars of his tricycle!” 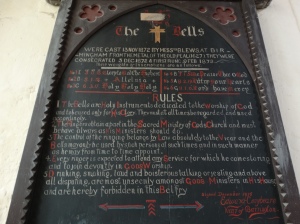 Conybeare gets a chapter in Brenda Colloms, Victorian Country Parsons, London: Constable & Co., 1977 – wonderful biographies of a selection of wonderful people. This story is on page 257: “Mrs Conybeare recalled an incident which occurred when the village labourers had been locked out by the farmers during a long industrial dispute. The vicar and his wife sympathized with the men and Mrs Conybeare, while discussing the matter with the lady of one of the grand houses, realized from the tone of the conversation that her companion strongly disapproved of the labourers. The vicar’s wife hurriedly changed the subject to the new Holman Hunt painting, The Shadow of Death, which showed Christ in the workshop at Nazareth. Her companion confessed she had seen the painting at the exhibition in London and condemned it. ‘I do not like having forced on upon me that our Lord was a working man and his Mother a peasant woman,’ she explained forcibly.”

The joys of being a vicar’s wife.

This entry was posted in Cambridgeshire. Bookmark the permalink.